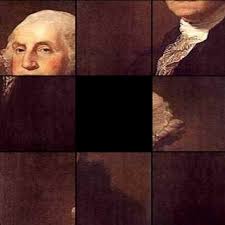 Have you ever played the slider puzzle game where you have a picture that’s scrambled up on the game board and you need to move the plastic pieces around until you reveal the intended picture?  This is one of the puzzle games that I enjoyed growing up.  As an added challenge, sometimes I’d scramble the pieces and look at where they were for a while and decide how I’d like to move them and then I’d close my eyes and move the pieces until I needed to look again.  Then I’d repeat the process until I had completed the picture with the goal being to recreate the picture in the least amount of “looks.”

Most of these puzzles are 3X3, 4X4 or 5X5.  How hard would such a puzzle be if it had a hundred individual pieces?  How about 1,000?  1,000,000 pieces?  How about  if the puzzle had over 7 Billion pieces?  That would equal one piece for each person who lives on the planet – how hard would the puzzle be then?  Not hard enough?  Ok, let’s give each piece the ability to choose where they want to go on the board.  How hard would it be then?  Creating the picture would be impossible for us, but not impossible with God.  God has a plan and he’s never surprised by anything.   God has a plan and when we mess up, He’s already included provisions for our inadequacies in His plan.

There are over 7 billion souls on this planet right now.  For each of those souls He has written a picture on their heart.  He has given each of us an instruction:  complete the picture!

So we all diligently and sometimes unknowingly heed His call and try to complete the picture.  We get married, get a job, have kids or whatever we think we need to do to complete the picture.  When we’re finished we look at our picture and realize that, like the slider game, there is a piece missing.  Some of us do whatever we think we need to do to fill in the missing piece.  We try to fill it with money and material trinkets but when we’re done it still looks incomplete.  Unsatisfied, we throw our hands up and look at God and exclaim:  “You’ve given me a puzzle I cannot solve by myself.  I’ve completed the picture as far as I can and it’s still incomplete!”

He points to His Son and advises us to give Him a try.

To those who are still under the just penalty of sin, I pray that you will give Him a try.

To those who have tried Christianity and found it wanting, I pray that you will once again give Him a try.

We in humanity spend too much time focusing on the dot which is the time that we are on this Earth compared to our eternal state to come.   When our finite existence gives way to our eternal home the only choice that will have mattered is whether or not we gave Jesus a try.

If you confess with your mouth Jesus as Lord, and believe in your heart that God raised Him from the dead, you will be saved.(Romans 10:9)

I pray that we all complete the picture.